What is a low beam?

The low beam is the headlight you turn on at dusk and dawn to illuminate the road ahead. The light reaches about 165 to 197 feet. It gives you better visibility without dazzling oncoming traffic.

When you turn on the low beam, the front headlights and rear taillights illuminate. If your vehicle is heavily loaded, it may be a little lower. The angle of the light cone changes and can dazzle oncoming traffic. You need to readjust the headlights.

A low beam is a headlight setting that provides a low, focused light to help you see the road ahead in darkness or poor visibility. Low beams should be used whenever possible to avoid dazzling other drivers.

A low beam typically provides a light intensity of between 800 and 1,200 candela. This is significantly lower than the high beam setting, which can produce up to 5,000 candela. Low beams are usually created using a halogen bulb, which is a type of incandescent bulb that uses less power than other types of bulbs.

Low beams are usually used in conjunction with high beams. When approaching another vehicle from the rear, it is polite to dip your headlights to low beam so as not to dazzle the other driver. Some newer vehicles have an automatic headlight dipping feature that will do this for you. 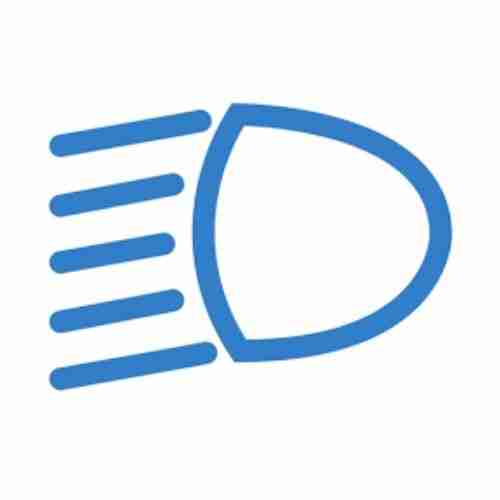 When do I have to switch on the low beam?

You must switch on the low beam in the following situations:

You can also switch on the low beam during the day as an alternative to a daytime running light. However, it does not replace this because it illuminates the road and not oncoming traffic. It also consumes more energy.

High beam headlights can be used in all of the above situations except when approaching or overtaking another vehicle, when they must be switched to low beam.

The law regarding headlights is different in each state and territory, so it’s best to check with your local road authority. Generally speaking, however, low beam headlights must be used at night or in conditions of poor visibility, such as fog.

They must also be used during the day when there is insufficient light to see clearly, such as in tunnels. When approaching or overtaking another vehicle, low beam headlights must also be used. High beam headlights can be used in all of the above situations except when approaching or overtaking another vehicle, when they must be switched to low beam.

In some states and territories, it is also a legal requirement to have your headlights on during the day, even if there is plenty of daylight. This is because daytime running lights make it easier for other drivers to see your vehicle.

If you’re not sure about the law in your state or territory, the best thing to do is to err on the side of caution and switch your headlights on whenever it’s getting dark or visibility is poor.

So, to recap: you should use your low beam headlights at night, in poor visibility, in foggy conditions, and during the day when it’s getting dark or visibility is poor. You should also use them when approaching or overtaking another vehicle.

To learn more about Low Beam Lights, check this video below.

Are headlights the same as low beams?
No, headlights and low beams are not the same. Headlights provide greater illumination than low beams in order to offer better visibility at a greater distance. Low beams are usually used for driving in areas with less overall light and to avoid blinding other drivers on the road. Headlights should be used when more lighting is needed, such as during nighttime or inclement weather conditions. It is important to know how your vehicle’s lights work so you can adjust them accordingly when driving in different situations. Be sure to consult your car’s user manual or contact a professional if you have any questions about your headlights or low beams.
How can you tell low beam from high beam?
When you are driving at night, it is important to know the difference between low beam and high beam lights. Low beam headlights cast a gentle light that allows you to see the road in front of you without blinding other drivers. High beam headlights are much brighter and allow for greater visibility at night, but they can temporarily blind oncoming drivers if used improperly or carelessly. To tell the difference between low and high beam lights, look for an indicator on your dashboard or near your headlight switch. Often times this indicator will be a small icon with either an “L” or an “H” next to it indicating whether you have chosen low or high beams.
What are low beam used for?
Low beam headlights are the most common type of headlight used in vehicles to provide illumination when driving. Low beams typically offer a wider reach than high beams, and can be used for greater visibility on dark roads or highways. In addition, low beam lights help drivers see obstacles or animals on the side of the road ahead of time. This allows drivers to adjust their speed accordingly, helping to avoid accidents and increase safety while driving at night. Low beam lights also assist other drivers in spotting your vehicle from a distance, making them especially important in dense traffic situations.